The High Court will hear a fresh judicial review challenge on HS2, this time challenging the decision by the Secretary of State for Transport to issue safeguarding directions without first undertaking a Strategic Environmental Assessment.

If the High Court hearing on safeguarding is successful, the current ban on developing land identified for the route of Phase 1 of HS2 would be lifted and could not be reinstated until the Government has completed a valid environmental assessment.

"We also remain committed to assisting residents groups and local businesses and will continue to help wherever possible with the resources and support people need." 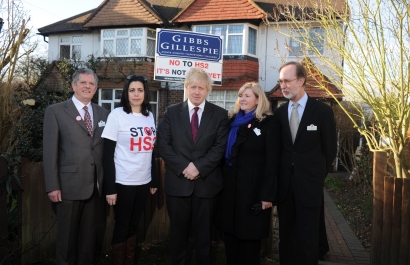 ”I have visited Ruislip twice in the last year to voice my disapproval of the scheme.I am by far the best candidate to push for the changes to HS2.We have already succeeded in getting a tunnel extended and now we have to look carefully at the business case for it. If we are going to go ahead there will have to be substantial mitigation measures in place and a real solution to having HS2 at Euston.”

Myth 3: HS2 is a sound investment returning over £2 for every £1 spent

Myth 4:  Only HS2 can solve our capacity issues

Myth 6:  The UK lacks fast connectivity between our cities

We oppose the HS2 High Speed Rail link, because the business case is based on unrealistic assumptions, the environmental impacthas not been assessed, it is not green, the strategic benefits are questionable, and the money could be better spent on other things. Please respond to the Government's HS2 consultation.

How you can help