On Tuesday 19 May the newly refurbished running track on Kings College Field was opened by the Mayor of Hillingdon. Almost £250k has been spent on upgrading this much used facility. The work included relaying the running track, improving the drainage in the infield area, and adding an outdoor gym.

The new facilities are all free to use and are part of the London Borough of Hillingdon’s strategy to develop and upgrade community facilities.

Cllr Denys commented "The Kings College running track is a traditional redgra track which is 400m long and has 6 straight lanes. It is known that David Hemery regularly trained on the track in the years leading up to the 1968 Olympics. Hopefully it will inspire future gold medallists." 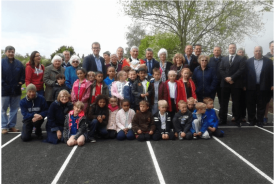 Eastcote and East Ruislip is in the Ruislip, Northwood and Pinner constituency